The Fox and the Owl: A Chitrali Fable 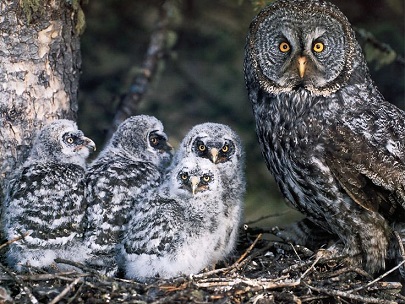 Once a by passing hungry fox saw a female owl on the maple tree cavity with her owlets, feeding, preening and brooding them. His mouth watered to see five healthy owlets, but found no way to reach them. Suddenly a scheme hit upon his mind. He went near the tree and asked the female owl
Fox: Owl Owl How many owlets do you have?
Owl: Five
Fox: Have you named them?
Owl: Not yet. I don’t know how to name children.
Fox: Don’t’ worry! I am here to help you. Now please throw one of them down so that I can guess a befitting name for it.
The foolish owl dropped an owlet, and the fox devoured it and went away.

The next day the fox came back and said “Owl Owl! How many owlets you have?”
Owl: They were five in all. But you have eaten up one of them.
Fox: Have you named them?
Owl: Be away with your names! I am not going to be fooled again.
Fox: Throw down one for me; otherwise I would kick the Maple Tree. Owl with her eyes full of tears threw one and the fox scooped at it and stuffed it into his mouth and went away.

Fox’s scheme met with success, therefore he decided to come daily to Owl, and take away her owlets using the same dialogues. In this way she lost three of her owlets.

On the fourth day, a female magpie saw the owl seated on the branch of the maple tree weeping. She couldn’t stand the sight and flew towards her.
Magpie: Mrs. Owl why are you weeping?
Owl: The fox took away three of my owlets, during the last three consecutive days, with threats of kicking the maple tree and destroying my nest.
After listening to her story, the magpie showed sympathy towards her, and taught her a counter scheme, and flew away tittering.

Fox was astonished to hear these words from the mouth of the owl. He sat there and pondered over the unexpected answer from an owl. He closed his eyes and said to himself
“How could a foolish owl think in such a way? Someone might have taught her. Let me ask her”: By saying these words he went near the tree and said
Fox: Mrs. Owl, who taught you the trick?
Owl: (oozing confidence), my friend, my teacher, the magpie
Fox: Oh I see Mrs. Magpie is behind the scene. Let me teach her a lesson. He decided to take revenge from the magpie of his humiliation and ran away towards the open fields to find the magpie. Upon reaching the field, he closed his eyes, took out his tongue to lull the cunning bird to believe that he was dead. He thought to play the dead- game as a counter move to catch the magpie off-guard, bring her down and give her an exemplary punishment. Upon seeing a dead fox lying on the ground, the magpie rushed to the scene to take a bite from the dead animal’s tongue. As soon as she extended her beak near the carcass, the sly fox caught her and she got trapped in the fox’s mouth. At that very moment she realized her mistake and cunning fox’s intentions, but it was too late. Now she as a last resort flapped her wings and attracted the nearby farmer’s attention. Farmers ran towards the field shouting, “Hey look, and a fox eating a magpie. Don’t let him get away.” Magpie’s flapping- wing- tactic transformed the situation and made a remarkable turnaround. The fox’s initial triumph was now cut under him. Now the fox was depended on magpie’s good will for his survival and the magpie had now the upper hand. By taking the advantage of fox’s loosing grip, she succeeded in making a space for her head. Once she took out her head out of her bitter foe’s tight grip, she told him. “Please don’t worry I’ll tell you a trick to get out of this difficult situation. You should simply say, a fox is eating the magpie so what! You all should mind your own business.” They will stop their chase and you would be saved from their wrath. The fox was exhausted of running and a magpie in mouth was adding to his misery. He had to fight on two fronts at the same time .He finally decided to opt for magpie’s advice. As soon as he opened his mouth to utter the words, the magpie flew away with a swift moment, filling his mouth with her droppings. In this way; she outmaneuvered and outwitted the fox in shrewdness and deception.

Faheem Amad Khan has done his Masters in English Literature and M.Phil in development Studies. He has been writing in a number of journals on development issues. He has got a taste for literature too. Faheem Ahmad Khan is from Mastuj Chitral and living in Abbottabad.
email:faheem.ctl@gmail.com
MAHRAKA.COM
A Website on the Culture, History and Languages of Chitral.
Contact: mahraka.mail@gmail.com