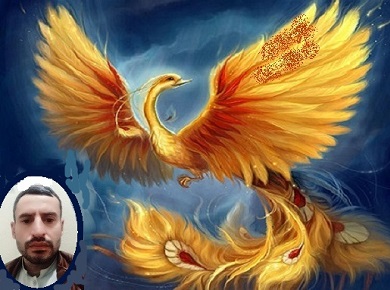 There has been a widespread myth of Phoenix (Quqnus in Arabic) in the Western World as well as the East. The tradition is believed to have originated in the ancient Greece, from where it spread to the Arabic and Persian mythology and finally found its way to India. The myth penetrated the Chitrali tradition, where the bird is called qoqnuz. According to the folklore, Khowar music started with the melody of this bird. The Myth goes as follows:

Qoqnuz is a very rare bird with 360 pores in its beak; each of these pores producing a unique melody. This makes the qoqnuz melody or the raag of qoqnuz. The bird lives a long life up to some 500 years. When it reaches its fragile age, it collects a large pile of wood and sits atop it. Then the bird sings a specific song, the wood catch fire and burns the bird to ashes. When the spring comes and the first drop of the rain falls on the ashes, an egg is formed, from which a new qoqnuz hatches out again. This cycle of birth and rebirth continue this way for ever.

It should be remembered that every raag has a certain rus; it is up to the expertise of the artiste how he or she renders the raag to realize the rus of the raag. The sur (note) and the shurties (place between the notes) have the properties to make the tapestry of sentiments and as well as to feel a certain raag. Rus is the essence of the raag which give a certain raag a specific color and make it different and unique from other raags. When the essence of the raag takes climax and reaches its highest peak then the feathers of qoqnuz catch fire.


Once upon a time four individuals belong to a common village went in search of qoqnuz. One of them was a female. They found the nest of quqnus and sat near it waiting for the song.The bird came out, sat on the pile and sang its song. But alas! the four individuals could only remember one raag each. These four are named after each of these individuals. They raags are Berangi, Kroy Komou, Shah Mardan Khan and Ali Sher Khan. These raags are called as the hang of qoqnoz or the melody of qoqnoz. It is said that all the melodies of Chitral originated from these four raags.

The bol of these raags did not survive long and people only remembered the melodies, rendred on instruments like surnai (clarinet) flute and sitar. In ancient times too, not many performers were not familiar with these melodies. In modern time there is no one in Chitral who can either play or identify all the four raags. In the recent past, some names like Shah Gule Zar, Ali Zahoor Khan and Farman Ali Taj were famous sitar players and could perform all the four raags. Shah Gule Zar’s son Afsar Khan of Miragram-I, a renowned sitar player of his time, could play one raag out of the four. I personally interviewed him and and recorded his sitar. In the present day, Chairman Shoukat Ali, sitar player and composer, could perform one of the melodies of qoqnoz called Ali Sher Khan but he could neither play nor identify the other four. Even the recently departed legendary Ustad Taleem Khan, well known surnai player, could not play any of the melodies of qoqnoz.

The exponents of Khowar music classified Khowar music into two groups. One is called dani and the other sauz. When I was researching about Chitrali music, from National College of Arts (NCA) Lahore, I came to the conclusion that dani and sauz are only the name of lay (tempo). In Indian classical music, there are three types of tempo namely, vilambat, mad and drut. Vilambat is slow, mad is fast and drut is faster. While in Khowar music there are only two which are dani and sauz. Ironically the modern musicologists and the musicians of Chitral misunderstood dani and sauz as two different forms of music rather than two different tempos.

Chitrali music is virgin in many areas and musicians need to be educated of music. The practical music as well as theoretical music is necessary to understand the nuance difference in this field. There are many things in term of knowledge which must be done in Khowar music but if I count all one by one then it will be boring as this article is for a layperson. A few complications I want to discuss are as fallows.
There are no standard notes like sa re ga etc which are fixed notes and their position are fixed.
There is no ascending and descending of notes so that a melody follows certain principle. In Khowar music a simple melody is repeated while a singer doesn’t know where the pitch is and where the notes are or how to intonate the notes.
There is no improvisation and expanding of raags and melodies but artiste confine in a limited area.
Raag is a different genre where alaap is intonated, sargam thrown in and in addition to many ways to expand the raag, there are also some rules to follow. While in Chitrali music there is no raag like Indian music, but the melodies are considered to be raag of Chitral.
For example, if sa and re are standard notes, Chitrali sur or notes are mostly in the form of shurties. Shurties mean notes present between the standard notes. Chitrali notes are present between sa and re or re and ga and so on.
Music should be a proper cycle, sometime a musician slide a note or move it like a wave and play with the sur remaining in the cycle, while Chitrali music is mostly folk and simple, the rhythm is typical.

It is the time that Chitrali music should be written in musical language otherwise the present melodies are dying day by day and will lost to history. It is true that very little effort has been taken to preserve and standardized the music of Chitral, but most probably a time will come when some students will take the tab to save the music from being forgotten and learn A, B, C of music and musical terminology.

Our music is rich in term of melodies, traditions, feelings and variations but what I mean to say is this field has been looked down upon by our society, therefore, like past the danger in future is visible. Our culture is the pure knowledge which we transfer to next generation otherwise youth could not identify themselves which is a great threat to a nation living in 21st century. Those nations who identified themselves are among the respectable nation in the world. They are using music as a tool not only to identify themselves but also made human out of human being. Music is a part of their education and curriculum. Today’s world needs ethics, we have conquered oceans and sky but this is the progress of outer world. Inner world is dry and there is no respect for elders nor do youngers know their position. The developed nations use music to polite and give awareness to their society by making compositions which give value to every life on this planet. There is a dire need to realize the self not only reading specific religious books or watching the dominant culture of India on media but literature, music and our culture is the best treasure trove, which guide us to open the secret of life.

There has been a long-standing debate about offering state run facilities for culture and those who are not willing to pander to popular taste. The expenditure incurred on cultural activities has often been described as wasteful or not economically viable because it does not bring any benefit back to the coffers in pure monetary term.