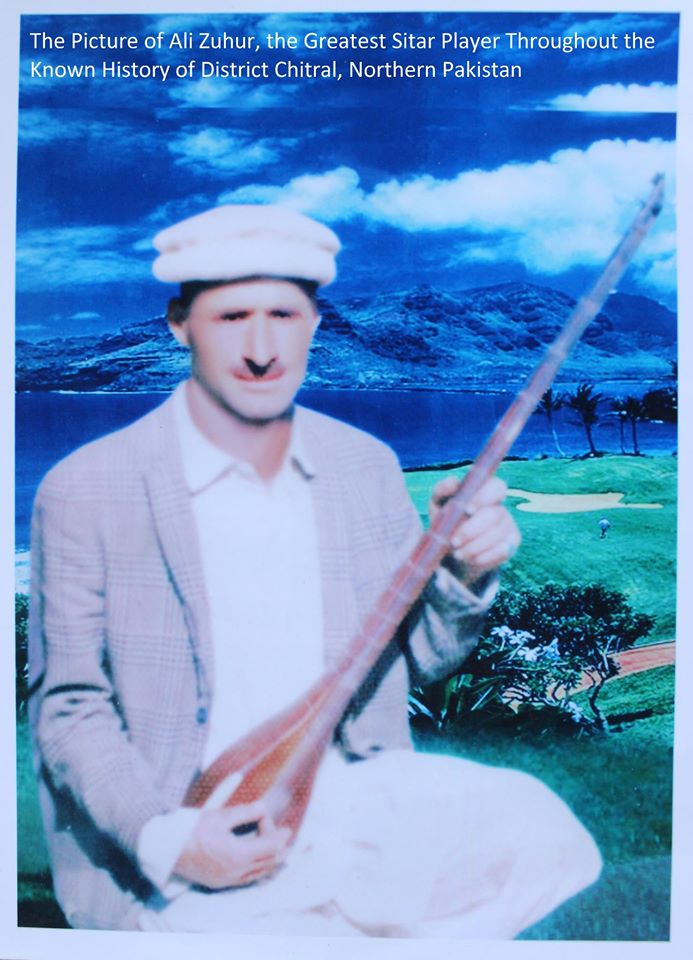 Ali Zuhoor was an exceptional sitar player and composer of Chitral, Northern Pakistan. He was born in 1926 to a notable family in Village Chapali, Tehsil Mastuj, district Chitral as the youngest son of Muhammad Alam Khan Lal. As a young man, he was nurtured in an aristocratic family tradition and learned the courtly etiquettes from his farther and forefather.

The Chapali village is awash by the River Yarkhun to the west and the Chamarkan rivulet frothing down the village along the stony streambed from the east. The village is known for distinctive aroma peculiar to each season of the year featuring wild followers, cool orchards, juicy fruits, autumn colors and a variety of songbirds. Wildfowls—partridges and pheasants—sing atop the mountain above the village and far below the Chamarkand pass. Coupled with natural attraction, the village has also long-standing history to promote the traditional Kho culture of the Hindukush region. This means, as a child, both natural and nurtured environment were favorable to Ali Zuhoor to become one of the best sitar players.

As rule of thumb then, a person possessing soldierly qualities used to be hold in high esteem. Confirming to this tradition, Ali Zuhoor entered as soldier in Chitral Scout (CS) and it was here that he composed songs of attachment to his village, country and ruler.
آنینین ہیم گا نیکو غازیان بوغدو ݯھتراروت
مہ بچے سلام کورور ملکو دردانہ میتاروت

In an audio interview recorded by Zar Wali Shah Zahid for Radio Pakistan, Ali Zuhoor says: “I have expressed love for my country and dedicated the song to ‘Torkhowo Mehtar’, means His Highness Muzafar ul Mulk, the then ruler of Chitral”.

Bahader Khan, a shrill-voiced singer, who oftentimes sang in Ali Zuhoor’s orchestra, recalls: “as a singer I had debut aged six. Just like an authentic talent-hunter, he encouraged and invited me to music events, and efficiently steered my career toward excellence”.
“I really take pride in singing with the fabulous sitar player of northern Pakistan and 1975 recorded four songs for Radio Pakistan Peshawar, being radioed on a regular basis since then”, he added. The songs are Ashru Jan, Gulab ta Voriar Vor Khor ta Sifat Kicha Boi, Har Asheqo Hardi Beqarare and Jo Kaloom Ma Sakhtio Me Jo Kalum Ma Tangio”.
He went on elaborating: “I have fond regard for him as an outstanding sitar player, who added creative dimension to the art and pioneered innovative techniques, clarity, pitch and sweetness of melody in his playing style believed to be far beyond imitation for his predecessor artists”.
“He was a perfect instrumentalist having masterly skills and command that gave him complete confidence in producing music whatever way he wanted. Throughout his career as sitar player, he never ever missed out on the rhythm and the more the drumbeat quickened the sweeter and faster became his melody”.
“I must say that sitar playing is a difficult art”, said Bahader, “and it may take an age to get to the zenith Ali Zuhoor had reached. It could not be possible without full devotion and loyalty to art—seemingly the domain of the great sitar player.”
“He participated in Jashan-e-Chitral in 1975 and was formally honored as the best instrumentalist of the region. Radio Pakistan Peshawar officially aired the news then”,
Bahader Khan informed. He was widely known and revered in Chitral, Gilgit-Baltistan and other places.
“Ali Zuhoor was a well-mannered and soft-spoken person who uttered less but had passion for listening to others. Occasionally he cracked light jokes but took great care to avoid hurting others. Whoever met him was appreciative of his behavior—hospitality, politeness, tolerance and kindness” he said.
“I clearly remember that devotees thronged his house most of the time to record his music and he extended warm welcome to them all. He also used to be invited to far and wide valleys of Chitral and Gilgit-Baltistan to perform”.

Hussain Akber Khan, nephew of Ali Zuhoor and the drummer in his music group said after a long reminiscence: “he always encouraged me and never complained of my occasional failures to balance the music rhythm. Instead he disguised the out of balance music into sort of unique and creative style that has become his trademark and widely popular amongst the new generation sitar enthusiasts. This, one can easily decode from his sitar music available in audio form”.

As a vocalist he got heavy voice. But whenever he sang along with his own sitar, he did it perfectly well paying precise attention to the originality of traditional songs, its notes and ups and down.

In his radio interview with Z W Shah Zahid, Ali Zuhoor declares: “I did not learn sitar from any specific person. Nor did I receive formal lessons from a teacher in the field. But I must name Muhammad Aziz Khan of village Dizg who taught me some old ‘dani’ (a traditional tune) and helped channelized my skills in the initial stages. Nevertheless, the playing style I have adopted is my own contrivance and I do not have anybody else’s influence on me”.


Responding to a question that without romance one would not learn sitar, Ali Zuhoor articulates: “I take a comparatively broader connotation of the word ‘romance’”. He further clarifies: “you can be in love with a musical instrument like me; you can be in love with a place you are living in. Thus I don’t subscribe to the narrow reference of the word”.
When asked about his favorite tune, he says: “I like all the tunes I play but ‘dok yakhdiz’ is the one I like the most because it has a pleasant end whereby two people find each other after a long separation and live happily after ever”.

Akber Ali, one of Ali Zuhoor’s relatives and a close friend added: “he was a tender-hearted man who harbored beautiful feelings in his thoughts that flowed into sweetening the melody of sitar music and added poignancy to it. His melody bespeaks an endearing and sensitive person who seems to have suffered underneath.”

Saeed Faqir, who remained in the tutorship of Ali Zuhoor for long time, said he was ‘the gem of sitar players’. “I regard him not only an awesome instrumentalist but also a good human being. Any ordinary person must have no problem to read aspects of his personality by carefully listening to what he produces through his sitar”.
“When I was sixteen”, said Faqir, “I felt an inclination towards sitar music”. It was time when Ali Zuhur was widely known as a master performer. For the first time I met him in his home in 1962-63 and since then I remained in awe of his skills till his last breath”.
“We used to play together in music events, and he used to synchronize my sitar with his own and blessed me to play along with him. Whilst playing together he usually outperformed me through his inimitable feats that were really difficult for me to catch up. I felt redundant. He was simply the best and perhaps none will be able to improve on what creativity, innovation and sweet music he has worked out in this particular field”, Faqir passed a judgment.

Being a genius instrumentalist, he played new tunes of Iqbaluddin Sahar and Mirza Ali Jan, who were singer and composer from new generation then. By carefully listening to the recorded audio cassettes of his last few years, one can understand that he had equal ease and expertise in playing a range of Urdu and Pushtu tunes. It is highly likely that he picked these tunes from radio programs or tape players freshly introduced the area.

The untimely death of the great artist in October 1981 left his fans extremely sad. Had he been lived a little longer, he would have attracted a great deal of publicity and fame in the print and electronic media. But still we are lucky to have volumes of his audio records available to us. What remains is to carefully save Ali Zuhoor’s precious heritage from being overshadowed by the mist of history. 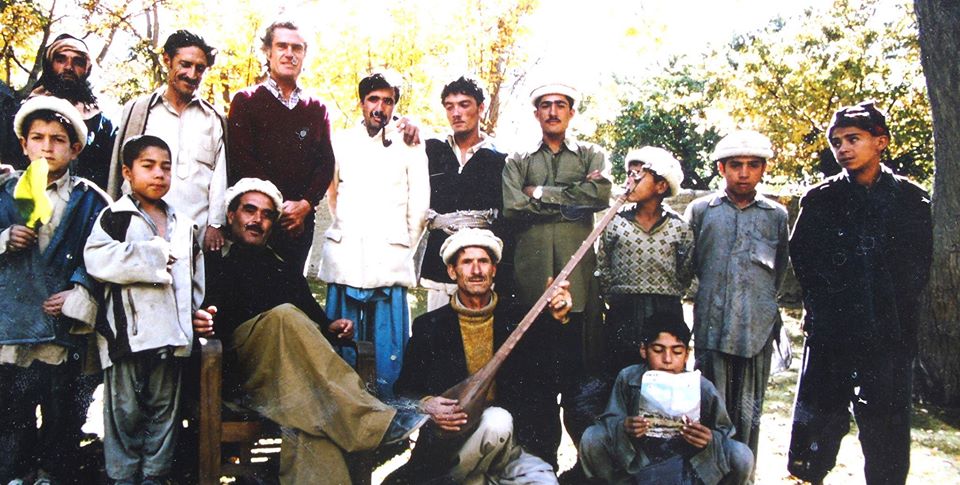 Shams ud Din is a Chitral based Writer, Educationist, Trekker and Sitar Player. He knows a lot about the Chitrali Music.