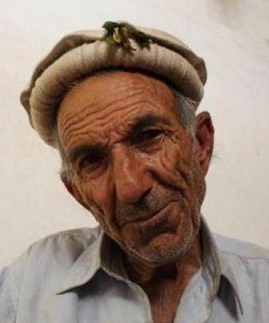 Mir Wali, 74, of village Kuragh, is a known folk singer and artist of district Chitral, Northern Pakistan. In recognition of his long, outstanding contribution to Chitral’s folk music, he earned the nickname Master. His resonant voice characterizing unreserved pathos and poignant note—a style that has the power to evoke feeling—can have a magic spell on listeners.

In an exclusive interview he told this scribe “I normally keep on comparing past life with what we have at present and my vote would go for the past, notwithstanding the present, too, has a great deal of its own merits. But what we miss now is genuine love, humanitarian consideration, the spirit of cooperation, traditional generosity of heart and mind and most importantly care-free life”.

He further argued “modern development has eaten away some of the worthy values of our indigenous culture and diluted our traditional music. Undoubtedly Chitral boast a rich cultural heritage particularly folk music that has taken inspiration from nature, say, soft snowflake, falling of waterfall, singing of birds, smell of flowers, fragrance of Sinjur Ispru (flowers of Russian Olive), glow of fading sunlight on glaciers, music of pasture flute and the rising of the full moon to name a few”.

He told in a soft, well-punctuated low tone “by-gone are the days when young pasture flutists tending cattle in early spring used to play flute that echoed in the nearby rock amplifying and sweetening the melody of the music. On occasions, wrangling ensued when the flutists hurled abuses couched in the flute music (belowa dishool) at passer-by”. I clearly observed that the artist had lapsed into deep melancholy as he unfolded the story. It is worth noting that the Chitral valley of northern Pakistan is replete with a range of folk lore whereby pasture flutists hurled abuses at passer-by just for fun and kidding.

The above stated characteristic of nature used to be embedded in people’s feeling in the past and defined the contours of the socio-anthropological parameters of the society. “Back then our culture had a taste, originality, simplicity and appeal”, Master Mir Wali described looking at me through the haze of tears in his eyes this time. Throughout this discussion I had a realization that he had put the clock of his life about 40 to 60 years back and the pleasant memories of the past pierced through his heart.

When asked about the trend of Chitral’s folk music he said “at present folksingers seem to have compromised the originality of our traditional songs. They seem to have switched over to Pashto notes and rhythm, which is a fast music compared to the slow and classic tempo of Khowar songs. It is worth concentrating that at present there is no noted composer. The folksingers of present time compose folksongs which have hardly three notes. When we look at old folksongs, they have five to seven notes and occupy the entire purdas (frets) of the Chitrali Sitar.” He nominated Mansoor Shabab as his favorite Khowar singer of the modern time. “Shabaab has got good voice and sing old song in classic melody”, he said. “But I would suggest he learn how to play sitar as well, which is not the case with him at present. With this additional qualification in the field of music, he could be a perfect artist of Chitral” he concluded. About learning to play Chitrali Sitar he said that his father had been his guide and teacher in the field who “encouraged and taught me how to play the instrument”. Stating his clear attachment to Khowar folksongs he said “for me the traditional songs have real meanings, which I carefully listen to and properly understand. When I sing a song, I normally concentrate on the inner feelings and messages it contain rather than the mere utterance of the melodious words”, he added. Of the Khowar folksongs, his most favorites are Baba Syar’s yar man hameen and lasprikan sum bol boghe tan nano zhan nan gherum. The former folk song that Kuragho Master sang was featured in Lok Virsa documentary as back as 1982. Kuragho Master has participated in a number of cultural shows in Karachi and other cities of the country and is still determined to carry on his great contribution for the promotion of Chitral’s unique cultural and musical heritage. May he live long!

Shams ud Din is a Chitral based Writer, Educationist, Trekker and Sitar Player. He knows a lot about the Chitrali Music.
MAHRAKA.COM
A Website on the Culture, History and Languages of Chitral.
Contact: mahraka.mail@gmail.com