﻿﻿ The Blacksmith and His Bear

THE BLACKSMITH AND HIS BEAR

Long time ago there lived a blacksmith with the reputation of doing his duty with much amusement and innovation. Having a jolly personality he enjoyed his work; and sometimes did his job it in the most crazy and funny way.

Once he went to the forest to make charcoal for his workshop. There he saw an abandoned bear cub; and immediately took him to his house to keep it as a pet. In the coming days he began to take great care of his new pet and left no stone unturned in grooming it. Soon both of them developed a bond of love and care. The tiny bear cub would demonstrate his love for his master in many ways. Commonly he would follow his master in the way that mostly generally pet dogs do. Wherever his master went he would follow him like his shadow. Plenty of food to eat and the black smith’s love soon turned the cub into an enormous sized bear.

One day a strange idea clicked his master. He thought rather than hiring a striker to help him in his chores why not he train the bear in the blacksmith craft. With that idea floating in mind he began teaching the king-size bear to hammer the hot iron. His training method was amazing. First he would give instructions on how to get a hold of a hammer and then how to strike with it? In the next portion of training he would pinpoint with his finger the correct place to strike the hammer. In the final stage he repeated the process on a real pink hot iron on an anvil. Soon the muscular bear became a quick mastering apprentice and learned his lessons with full dedication. The craftsman would cherish his performance. An unpaid striker with a sheer power and a high stamina was a true blessing in disguise for him. 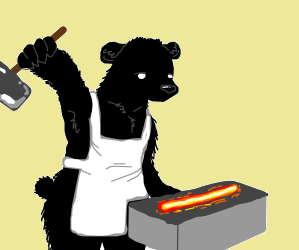 The innovative ironsmith was very proud of his accomplishment. In front of his clients, he would often boast of his animal training skills. In addition to that, he would claim that animals are as intelligent as humans. Their learning skills only need a bit polishing and who else can hone their skills better than me? By saying that he would node to the bear to demonstrate his skills. On-the-spot, amazing performance by the huge animal, would leave the clients dumbfound.

One day the blacksmith as usual put pink hot iron on the anvil. When it was the time to node the bear to do rest of the work; he suddenly felt an itch on his scalp. He couldn’t resist the urge to starch and un- intentionally scratched his head without realising that the bear was closely monitoring his every move. The animal took the gesture in a wrong way, he took it as a green light to strike. Within a second, he lifted the hammer into the air and stroke his master’s head with a massive force. The poor soul found no time to move aside, so he succumbed to head injury and immediately died on the spot. The blacksmith’s crazy idea of handing over a very delicate job to a heavy weight beast: finally cost him his life. ’Ohrts dosi mochigari’ frequently utilized nowadays as an adage in Khowar language which means to hand over an important task to an ill-suited person.